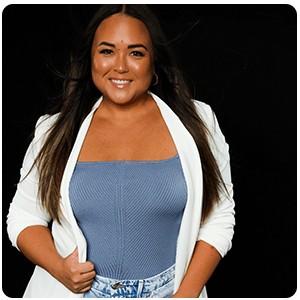 Katie Li is a professional choreographer and educator based in her hometown of Niceville, Florida. She started dancing at Niceville High School at the age of 14, and by her senior year she was named captain. During her time in high school, she trained in a local studio, and choreographed competitive solos for her peers. Shortly after graduation in 2007, she became the assistant coach and choreographer for multiple middle schools and high schools in Okaloosa County.

Katie, on a dance line scholarship, under Joe Taylor at Northwest Florida State College was captain of the dance line and choreographed a piece for the Dance Facets in 2009. Nationally, Katie is an award-winning choreographer and has presented her work throughout Florida, Georgia, Alabama and Louisiana where her choreography receives critical acclaim. Katie created the Verve in 2017 as a pre-professional company designed for dancers ready to bridge into the elite level. In 2019, she turned what was a small company into an emerging dance studio.

The Verve, in its inaugural year has proved her choreography to again, be award winning. Both team ensembles as well as soloists, have competed and performed in many venues in the southeast winning high scores, high point and scholarships to conventions. She has been invited as a master teacher/choreographer to various venues including schools as well as many private studios along the southeast coast.

Katie’s class style is an eclectic mix of pure athleticism and sheer technique with an emphasis on dynamics, musicality, emotion and performance. She specializes in contemporary, lyrical, jazz funk and stretch/strength training.