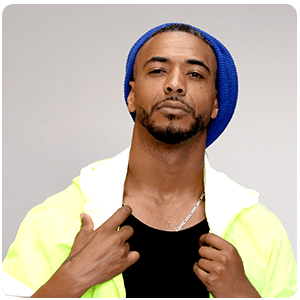 Casa Grant is a Southwest explosion that comes to you in all forms entertainment. While his main artistic focus is dance and everything inclusive, he also dabbles in the world of acting, the behind the scenes with creative directing and also artistic coaching. Casa’s first taste of professional work when started the day he was born, where he was featured in the local Ft. Hood newspaper for being “unexpectedly delivered” by his father who was a soldier in the US Army. Since then, he has grown into professionally represented all around artist and entertainer in the entertain industry in Los Angeles California. In the last decade of his ongoing career, he has been hired to do several print ads, performed nationally and internationally in professional shows, danced in films and television with some of your favorite actors; artists; and athletes, and has  recently transitioned into acting by way of stand in and currently hosts/emcees in the competitive dance industry for Revolution Talent.

When it comes to dance Casa is constantly training and working to perfect his craft so that he can continue to be highly sought after within his industry, and also so he can bring his best knowledge to the next generations of dance hopefuls. As a dancer most of Casas training took place in Hawaii (24/7 & Nix Dance) and Arizona (LimeLight Pro. & Dance Fusion), he was fortunate to take training from elite teachers and choreographers in California as well.  As a teacher, Casa has been fortunate enough to train dancers across the world, some of which have continued to dance professionally in the commercial and concert industries.  He really enjoys “transitioning” dancers to a point where they can comfortably join a higher level class and even go into the professional world and now what to do/expect. He helps artists  feel more confident in their  foundational and performance skills. He provides a self accountable environment that allows dancers of any level to bravely grow into their best through foundation training, movement exploration, and choreography. His joy as a mentor comes from seeing his students grow into the best versions of themselves while they are training with him. Although Casa is a well rounded, versatile dancer, he focuses on teaching mainly Jazz and Hip Hop (all varieties), and also includes  Lyrical and Contemporary. While holding students accountable for their own growth, he also nurtures and supports them, in every class.  Although Casa prefers live interaction, this pandemic has allowed him to grow in his technological and  social media presence  by providing zoom classes as those became his temporary outlet.  He started teaching online classes and doing private lessons  for studios in New York, Louisiana, Florida and California.

While his career has given him many opportunities thus far, he does looks forward to what his future brings him, while he gratefully works on staying focused on what the present, presents to him.